Helpful Tools or Instruments of Torture 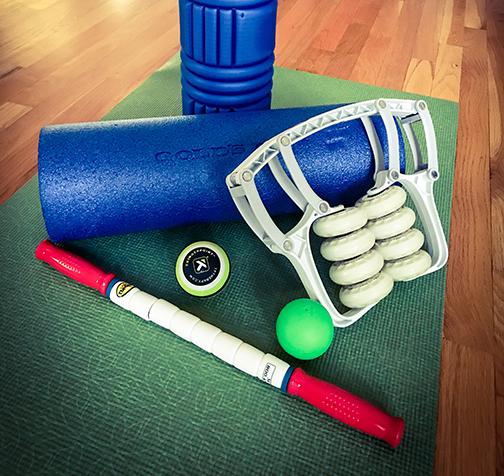 My relationship with these objects is complicated. It is most definitely love/hate.

I used a foam roller to recover from my anterior tibial tendinitis, and to maintain my life during marathon training. There is absolutely no way I would have survived dropping my kids off, running 20 miles, picking my kids up, making dinner and getting everyone to their activities without my foam roller. I am most definitely an advocate for their use, however I loathe using them.

Rolling around the floor on a giant pool noodle — ok, not really but thats what I thought it looked like when I bought the first one, an aquatic flotation device — it’s just not a graceful comfortable activity. Why can’t it feel more like yoga, where at least if I nail the pose I can feel like I accomplished something beautiful and strong. When I’m done with a good foam rolling session, I feel more like the noodle.

Leaning on the pool noodle is the ‘jaws of pain’ aka the R8 Roller. That’s the weird thing with all the fun looking wheel things on it. They’re not wheels, and they’re not fun. They’re connected by springs. You put your leg in between those wheels. It hurts. A lot.

I use the lacrosse ball to roll my shoulders. I put it between my body and a wall or the floor, and that actually feels really great. However, when I use it and a dumbbell to pin the fascia in my hamstring as I stretch my leg out, that doesn’t feel great.

That funny looking striped ball is for my foot. Different levels of hardness within the same ball helps me get into the tricky spots on my ankle and my heel without bruising them.

These instruments have spent most of their life with me in the corner with my free weights and yoga mats. I’ll stare at them, knowing I should pull them out and use them, feeling some kind of weird guilt, like I’m wasting their gift and will be struck down with a horrible injury any day. Or it’s more like I know they’re good for me, but I hate using them so much. I avoid them, that is until I can’t.

I’ve had other injuries before, but plantar fasciitis, that one is the worst. It isn’t the worst really because of pain or level of injury, but because of its persistence. It just wouldn’t go away. I was back up and running after abdominal surgery faster than with the plantar fasciitis. I took off more than 3 months, and that was about 6 months after symptoms started. It’s a booger.

After a while doing the runner thing, “if I ignore it, maybe it will just go away.” I then decided I would get serious about treating it. I had dry needling done. Massage. PT. I was doing the exercises the PT gave me at home. I avoided any activity that involved pushing off with my foot, running, jumping. Pretty much just avoided everything fun. I broke down and saw a podiatrist. I gave up my “barefoot” shoes and had custom insoles made, which I think made a world of difference. However, I feel like the key to my recovery, is the fact that I dedicated myself to foam rolling and stretching every day. No excuses. Every day.

I stopped ignoring the injury, saw the doctor, did what he said all while I tortured myself with these helpful tools consistently for a few months. Now I am running again pain free. Coincidence? Not likely.

It’s still a complicated love/hate relationship, but I don’t think I could sever these ties without giving up running. And, let’s just be real, I become the worst version of myself when I’m not running. So, I can either endure the torture and be the happiest me, or lose my sanity because I don’t like the stupid tools. It’s complicated.